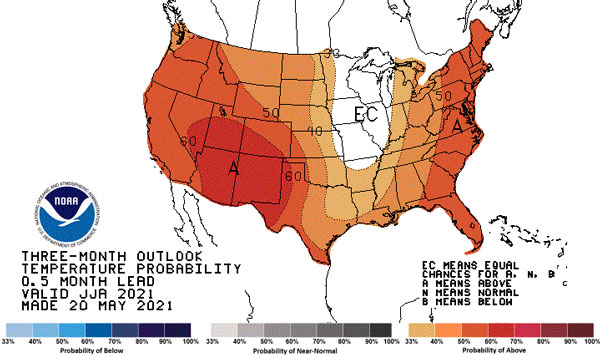 Temperatures were cooler than normal in April (Figure 2), creating issues with planting and emergence of summer crops. Several freeze events, including events in early May, further stressed the winter wheat crop and resulted in emergence issues with early-planted corn. It also led to reduced evaporative demand in the atmosphere and helped retain surface moisture. 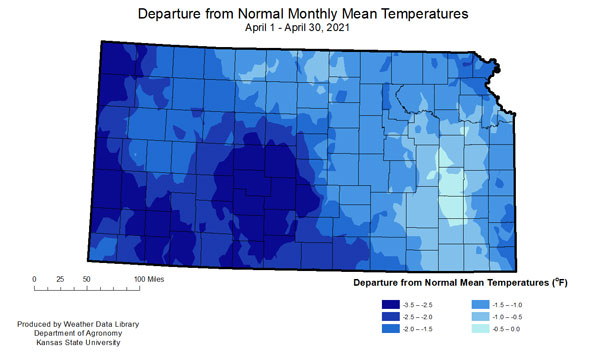 Aside from temperature, a major concern is precipitation. Summer precipitation constitutes the majority of the annual precipitation, particularly in the west. Timing and amounts are also critical. Despite some periods of very dry weather over the last few months, all divisions are currently above normal year-to-date except the South Central. Unfortunately, amounts have been excessive in parts of the state, creating flooding issues in isolated areas.  Tribune 1W, received 5.66 inches on May 16.  Current year-to-date total for Tribune is 12.98 inches compared to the normal of 4.96 inches. In contrast, Wellington, Cherokee County has recorded 9.35 inches compared to the normal of 11.04 inches.

The persistent cool weather and slow to change weather has been the result of split flow across the United States (Figure 3). Split flow means there are two active jet streams that often segregate the momentum across the region. In addition, they lead to more stagnant weather patterns with cut off lows and longer periods of warm/dry or wet/cool. This also typically results in less severe weather, which has been noted across the Central Plains. 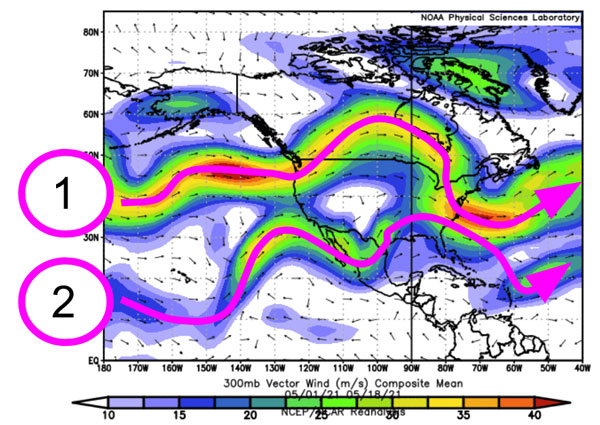 The precipitation outlook for summer is neutral, meaning equally likely to be above or below normal for most of the state with low chances of below normal for western Kansas (Figure 4). Distribution of that moisture will be critical and is often highly localized during the summer, dependent on persistent storm complex tracks. 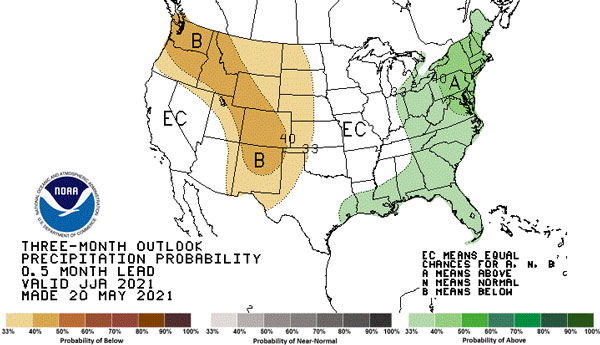 Forecast models provide a wide variance in possible precipitation outcomes for the season and resulting drought impacts. While there are many models, one method is to blend the models together in what is called an “Ensemble Mean.” This provides a quick glimpse in overall trends in all forecast models for the period. The result of the June through August model output is for overall slightly below normal moisture expected for Kansas and much of the west (Figure 5). However, it doesn’t indicate the distribution patterns and doesn’t provide further guidance on flood or drought impacts.

The US Drought Monitor favors redevelopment of drought conditions for western Kansas, where conditions have recently eased (Figure 6).  Drought can develop rapidly in the summer with much warmer temperatures and actively growing vegetation. Overall storm track/patterns will be the ultimate driver of trends over the next few months. Despite a period of wet weather, the three-month period can be significantly drier should a stagnant weather pattern continue into summer. 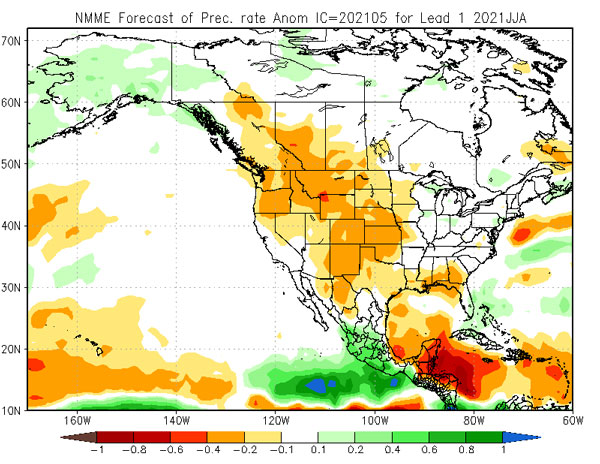 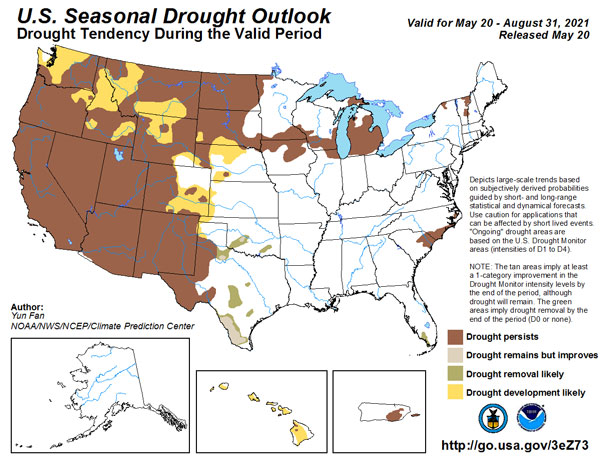 The science behind the outlook

Historically, the ENSO (El Niño Southern Oscillation) in the equatorial Pacific has little impact on summer conditions in Kansas. This year a moderate La Niña to start the year has officially faded to neutral conditions as of this week (Figure 6). The previously mentioned antecedent conditions in Kansas and in the dry southwest often have a higher influence than ENSO.

Another concern is the Pacific Ocean off the west coast of the United States. Temperatures are much warmer than normal already and expected to continue (Figure 6). This often develops negative EPO (East Pacific Oscillation) which incurs another ridge of high pressure across the western United States, driving the Jetstream northward. On the opposite coast, warmer temperatures currently exist in the Atlantic Ocean with forecasts for above normal tropical activity once again in 2021. Tropical systems in the Atlantic form under high pressure which would infer ridging (high pressure) to our east. 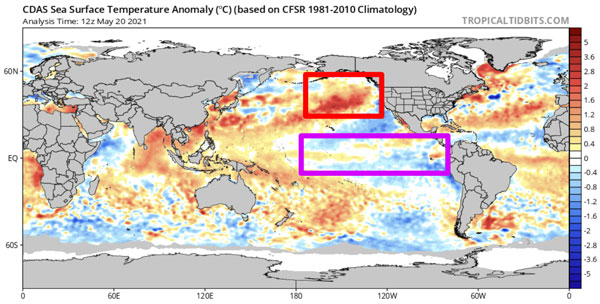 With high pressure often to the west and east, two things can happen. First, we could spend much time in the transition area on either side of the high pressures. This would typically mean impacts from ridge-riding troughs (weak low pressure systems) providing increased amounts of moisture and normal to slightly below-normal temperatures. Another possibility, which would align with our overall stagnant weather pattern we have observed thus far in 2021, would be a large scale ridge/high pressure across the entire US. This would likely mean above-normal temperatures and drier conditions. This scenario would have southwest monsoonal influences and rely on its location for any moisture. Should it persistently set up over one location, it would have a resulting impact on temperatures (and increased precipitation).

Often, summers get remembered for a short term period that has a high impact (significant rain event or week-long heat wave). This summer (as usual) will feature them, but the impacts will be determined by the persistent pattern averaged over the next three months.