Winter has had a tight hold over February weather. The outlook for March (the first part of the month) calls for an increased chance of cooler-than-normal temperatures across the state (Figure 1).  The signal is strongest in the northeast, and weakest in the southwest.  The precipitation pattern for March is less clear, with equal chances of above-normal, normal, or below-normal amounts.  A normal or slightly below normal precipitation pattern for March would be favorable in the eastern divisions, where saturated soils continue to linger from the excessive fall moisture.  Cool temperatures would slow the normal drying pattern.  If that is coupled with wetter-than-normal conditions, planting delays could be a problem.  In addition, flooding could be an issue as many streams, ponds, and reservoirs are full. We will have more details on soil moisture and possible issues next week. 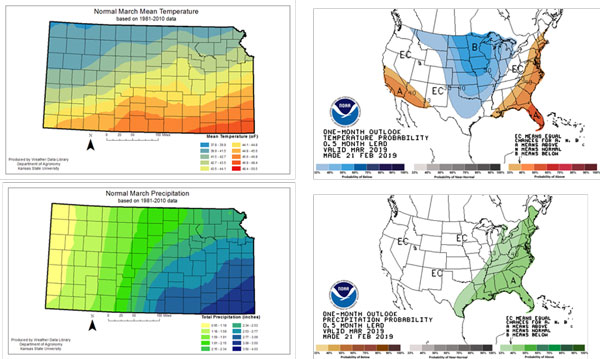 There is a slight chance for above-normal precipitation state-wide for the period.  Again, this does not indicate the distribution pattern.  A slightly drier-than-normal March or April that allows for an adequate planting window would actually be favorable in the eastern divisions.  The western third of the state has drier soil moistures at the surface, and would benefit more from a normal precipitation pattern.

While an El Niño has been officially declared, it continues to be weak.  An El Niño generally favors wetter-than-normal conditions in the Central Plains.  However, the El Niño signal has its weakest correlation in the spring season.  Impacts are more likely to be the result of an active Madden Julian Oscillation, which results in increased frequency of storm systems. This increases the chance of normal to above-normal precipitation in Kansas.  Additionally, there is a positive pattern in the Arctic Oscillation which is forecasted to continue through the next few weeks.  This makes cold intrusions into the Plains more likely and is known to phase polar/subtropical jet streams across the U.S. resulting in stronger storm systems. 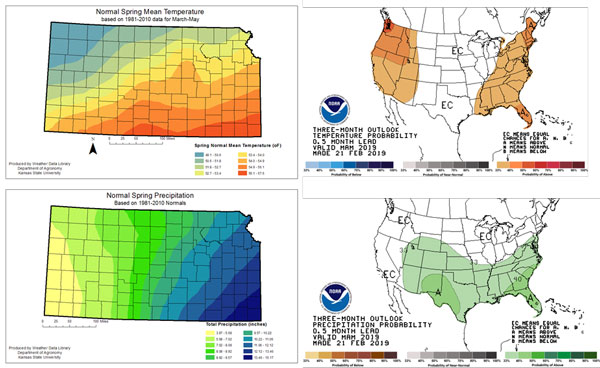