The latest USDA-National Agricultural Statistics Service crop progress and condition report released September 19, 2022 classified 51% of the soybean crop to be in fair or good condition. Overall, 40% of all soybeans in Kansas are dropping leaves, ahead of 34% from last year and the average .

The weather conditions expected for the last portion of September will be critical for soybeans as related to seed filling and determining final seed weight.

Current conditions have been much warmer than normal thus far in September. In addition, current forecast projections favor high confidence in continued warmth the remainder of September and into early October. While there are some chances for moisture, they will remain limited to the next few days with below-normal precipitation also significantly favored into early October. Seasonally, we continue the weekly decrease in normal precipitation as we head towards the driest season of the year (winter). As a result, below-average precipitation unfortunately means potentially very little, if any, moisture. Warm and dry conditions will favor overall low humidity, increasing drought and wide day/night temperature swings.

Soybeans will reach final maturity with high seed water content, moving from 75-80% (R6) to around 50% (R7) from beginning of seed filling until final maturity (Figure 1). Final maturity is defined as the formation of the black layer in the seeds. The process of seed dry matter accumulation and moisture changes will depend on the maturity group (affecting the length of the season), planting date, and weather conditions experienced during the latter part of the reproductive phase.

As described for corn, seed water loss for soybeans can also divided in two phases: 1) before “black layer” or maturity, and 2) after black layer.

For this current season, we can expect large yield impacts due to the current heat + drought conditions, resulting in poor seed weight. In overall, seed weight contributes roughly in 30-40% of the final total yield for this crop, emphasizing the impacts of the stress conditions on the attainable yields. 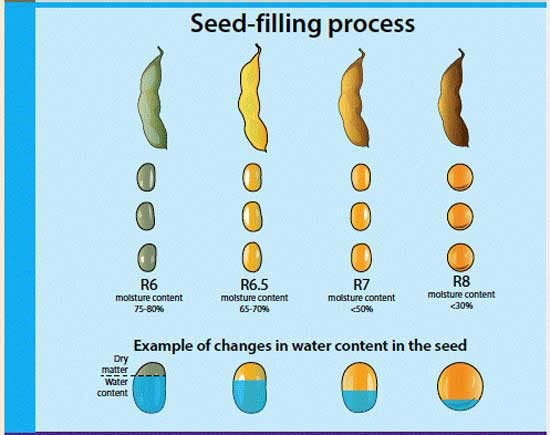 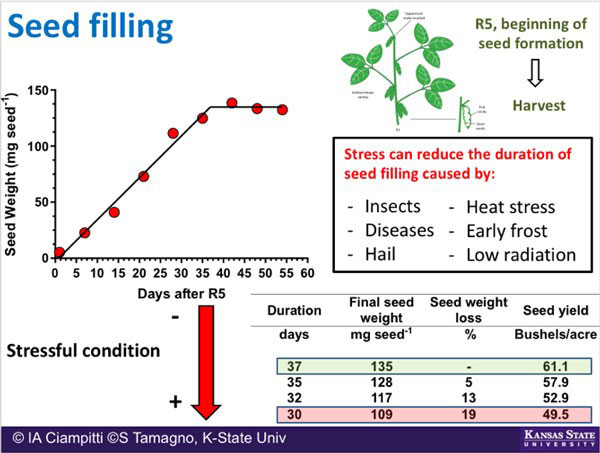 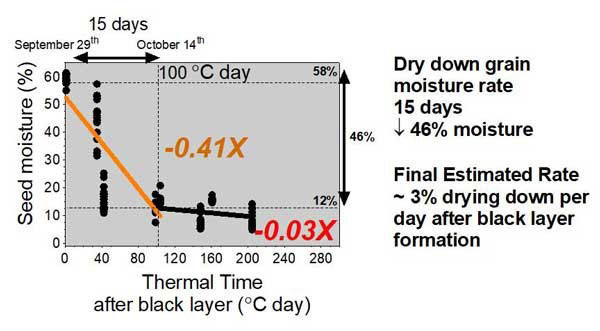