The latest USDA-National Agricultural Statistics Service crop progress and condition report classified 56% of the soybean crop to be in good or excellent condition. Overall, 27% of all soybeans in Kansas are dropping leaves.

While current conditions have been warmer-than-average, temperatures are expected to trend towards cooler than normal during the next 8- to 14-day period. The current October outlook does suggest an increased chance for warmer-than-normal conditions to return for October. Drying may still take a significant amount of time, as typical October temperatures are much cooler than September. There is a slight chance for wetter-than-normal conditions in the short term (6-10 days), but the outlook for October favors drier-than-normal conditions in the southeastern corner of Kansas, and equal chances for the rest of the state. Keep in mind that there is a significant drop in normal rainfall amounts from September to October as we move into a typically drier part of the year.

Changes in the water content during the seed-filling process (Figure 1) were previously described in our “Soybean Growth and Development” poster. As described for corn, seed water loss for soybeans can also divided in two phases: 1) before “black layer” or maturity, and 2) after black layer. 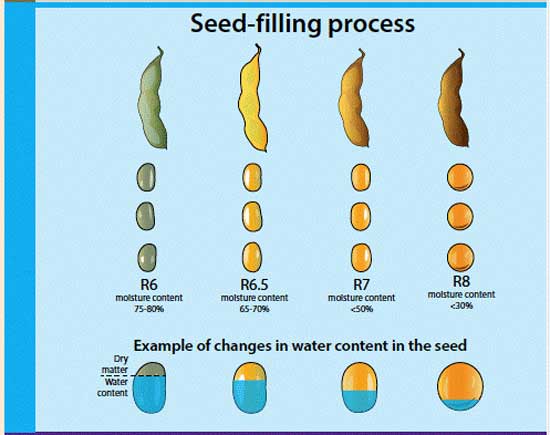 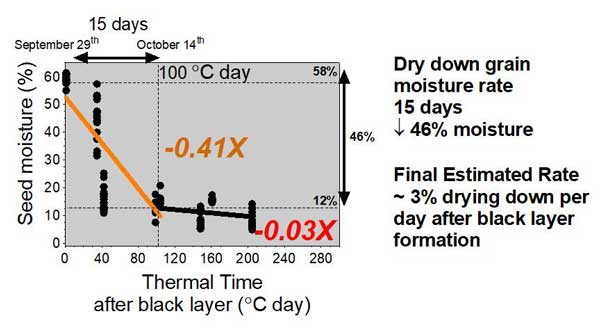 For more information on dry down rates for corn, see the eUpdate article, “Rate of dry down in corn before harvest”, in the September 13, 2019 issue.