There are many disease organisms that can reduce corn yields in Kansas. One of the stealthiest is the root-lesion nematode (RLN) because it operates below ground on the roots and often has no specific, identifiable symptoms other than yield loss. It is present, at some level, in nearly all corn fields in the state. Historically the largest yield losses, which can exceed 40 percent in individual fields, occur in western Kansas where irrigated, no-till, continuous corn production systems in sandy soils are common.

Like most nematode problems, visible symptoms, if any, may be limited to patchy areas of the field where growth is stunted. Sometimes yellowing may also occur (Figure 1). Occasionally, roots may have lesions on them or roots may appear to be pruned (Figure 2).

Figure 1. Yellowing of plants caused by root-lesion and other nematode injury. Yield in the center of these areas was as low as 30 bu/ac. Photo courtesy of Tamra Jackson-Ziems, University of Nebraska-Lincoln. 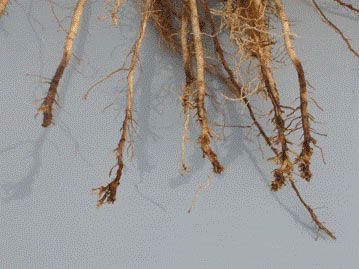 Figure 2. Badly damaged roots near the end of the season with lesions and root pruning. Photo courtesy of Tamra Jackson-Ziems, University of Nebraska-Lincoln.

The best way to identify a root lesion nematode problem is by a whole-root assay. Optimal time for sampling is when corn is between V5 to V7 growth stage. Suspect plants should be dug from the soil. Try to keep some of the soil with the roots. Keep samples away from excessive heat.

You can also find more information about sampling for corn nematode on a recent YouTube video by K-State Plant Pathology at https://youtu.be/WWC23etxJYs 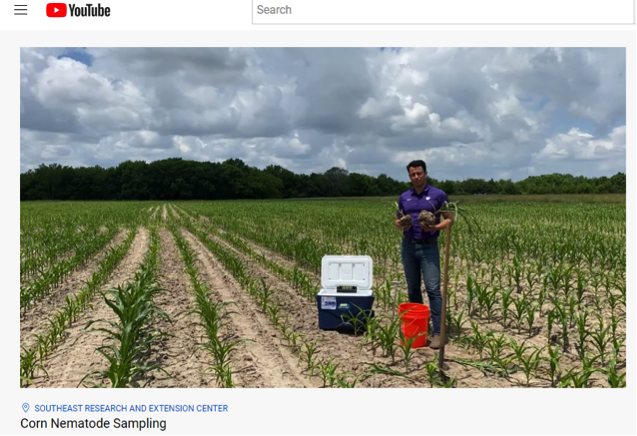 There are several commercially available seed treatment nematicides currently marketed, but in university trials, results have been inconsistent. Although root lesion nematode has a wide host range, studies have shown that soybean and sorghum are effective rotation crops for controlling the most common species of RLN in Kansas. Other plant-parasitic nematodes that occasionally result in losses include the sting, stunt, and stubby-root nematodes.

Contact your local K-State Extension Office. They will work with you to send photos of the problem (close-up, whole plant, roots, and field shot) and root and soil samples to the K-State Plant Disease Diagnostic Lab.