In 2019, both March and November have been significantly colder than normal, storming in like a lion. Thankfully, November has a long way to go before it reaches comparative record departures set in March (Figure 1). While the cold air has been unpleasant, it has had some benefits for producers in the region (and a few negatives, too). It has enabled a good window to begin fertilizer applications for next year’s crops (colder soil temperatures). It has also allowed the producers to finish row crop harvest for much of the state. However, eastern Kansas continues to see just enough moisture to have poor field conditions. The weather has also not been ideal for winter crop development, such as wheat and canola, who need to get thoroughly established before such cold conditions.

Let’s break down the cold temperatures thus far in November and look at the reasons we have seen these anomalies. 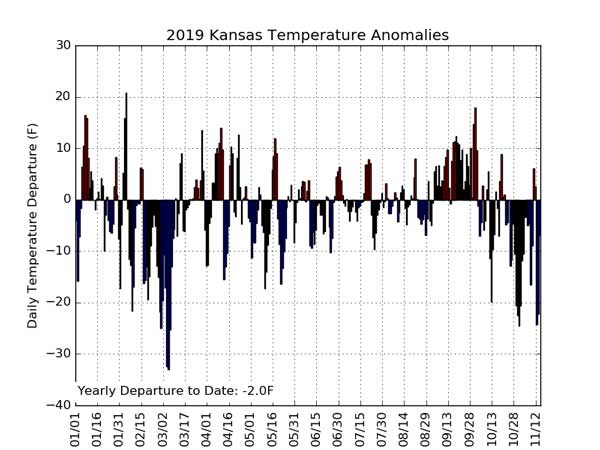 Figure 1. Daily temperature anomalies for Kansas for 2019. Note the significant below normal temperatures in March compared to that of October and November (Kansas Mesonet).

A significant ridge of high pressure (Figure 2, yellow line) has been the cause for prolonged much warmer than normal temperatures along the West Coast. It has also aided in the development of a significant dry trend - hence recent wildfires in California. That ridge is also obstructing our westerly flow off the Pacific. Storms pushing east across the ocean (Figure 2, red arrow) run into this ridge and quickly dissipate (Figure 2, black arrow). Storm systems that bring moisture to the West Coast and Central Plains often must originate in the Pacific - hence our recent dry spell. Instead, the northwest and sometimes northerly upper level wind flow has been transporting cold, arctic air almost due south into the Central Plains (Figure 2, blue arrow). This northerly flow has been persistent over the previous weeks bringing shots of much colder, drier air. While this flow is not overly anomalous, the persistence and true northerly arctic origin of the air masses is rather rare for November standards. 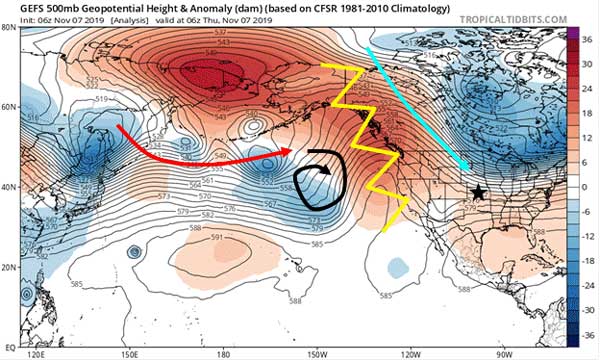 As crazy as it may sound, this pattern is actually loaded from a pattern further west over the Indian Ocean. The Indian Ocean Dipole index (IOD) measures the average sea surface temperature of the Indian Ocean compared to normal. The past month has seen record warm waters in the Indian Ocean (positive values in Figure 3) which in turn suppress the jet stream over the Pacific Ocean (Figure 2, red arrow). This helps develop the prominent ridge over the western United States without more favorable forcing around. It also leads to very dry, drought conditions in much of Australia which are being observed currently. 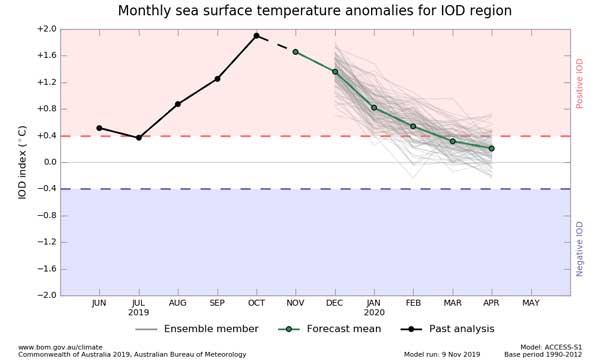 Figure 3. Indian Ocean Dipole (IOD) index has been at a record high positive anomaly. It is forecasted to slowly return to neutral conditions over the next five months (Bureau of Meteorology, Australia)

Will it warm up?

The big question on everyone’s mind is will it warm up? Short answer: yes.

In the moderate-to-long-range, the forecasted upper level wind pattern is suggestive that some transition to more westerly flow will occur, but we still won’t lose that northerly component completely. We will still continue the modest northwest flow (Figure 4, orange arrow). However, another ridge of high pressure (Figure 4, black jagged line) will cut off our arctic origins. This means we will definitely see temperatures modify compared to previous days into next week. Also, note the change in placement of the West Coast ridge (Figure 4, yellow line) and how it has shifted southward. This is allowing some energy from the Jetstream across the Pacific (Figure 4, red arrow) to squeak over the ridge and provide continued periodic weak frontal systems in the Great Plains. Unfortunately, these systems are usually weak, with periods of winds and clouds but little if any moisture. Something to note is also a weak area of low pressure that is trying to form off the Baja California Peninsula (Figure 4, pink arrow). It will try to bring some moisture eastward into southern United States. While not super beneficial for Kansas, should it become more prominent with time, it may be the key to break down the ridge on the West Coast. Something to watch for going into the end of the month and maybe a chance at some moisture going into December. 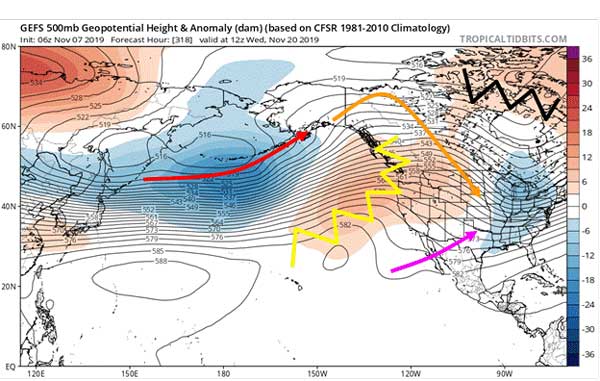 The Climate Prediction Center is on board with this pattern change and shows a slight probability of above-normal temperatures for much of the state for December. They also anticipate this moderated pattern to continue into early 2020. Precipitation wise, there is not much signal for above/below normal precipitation through the same period. Therefore, a neutral probability exists for December through February of above/below normal rain/snow (Figure 5). Keep in mind, winter is usually the driest portion of the year for Kansas. Anticipated amounts are often light and one large storm system could quickly change the winter’s precipitation summary. Typically, however, with drought to our southwest in the fall, it is often harder to get above-normal moisture into the following winter and spring. 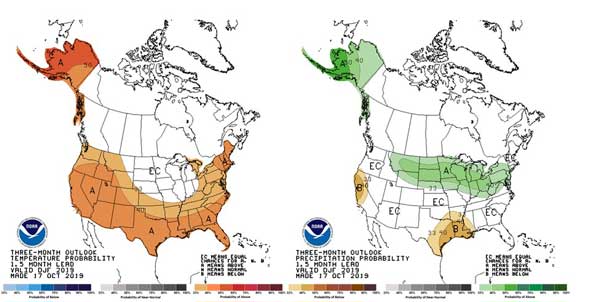 Figure 5. December through February outlooks from the Climate Prediction Center. Temperature probability forecast on the left, precipitation on the right.

One final concern is the continued above-normal amounts of moisture in many of the state’s lakes/reservoirs. This, combined with continued above-normal flows in large rivers to the east and south, will likely yield a concern for spring flooding. It takes substantial time for these bodies of water to drain and lower following the excessive 2019 moisture. Therefore, even if we would continue to see below-normal moisture for much of the region through the winter, it is likely that we will see above-normal concerns for large river/tributary and lake flooding again in 2020.