February was a mixed pattern for both temperature and precipitation. What will the spring season bring to Kansas?  The 6-to-10 and 8-to-14 day outlooks favor a continuation of the cooler-than-normal pattern into early March. The remainder of the outlook for March also favors a continuation of that trend (Fig. 1, lower right). The precipitation outlook (Fig. 1, upper right) is less certain, with equal chances of above- or below-normal precipitation, the exception being for the extreme eastern part of the state where there is a slight chance of below-normal precipitation. This pattern would be more favorable for spring fieldwork and calving than last year. 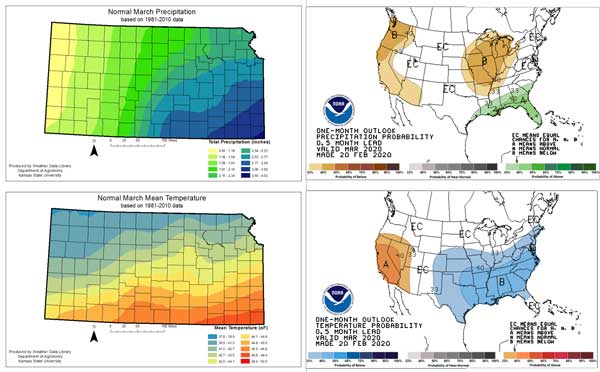 Looking towards the spring period (March through May), the temperature outlook is neutral across the state, with equal chances of above- or below-normal temperatures. However, this does not indicate how those temperatures may be distributed. A moderate start to the spring would allow for a gradual start to the growing season. That in turn would reduce vulnerability to any late frost event. 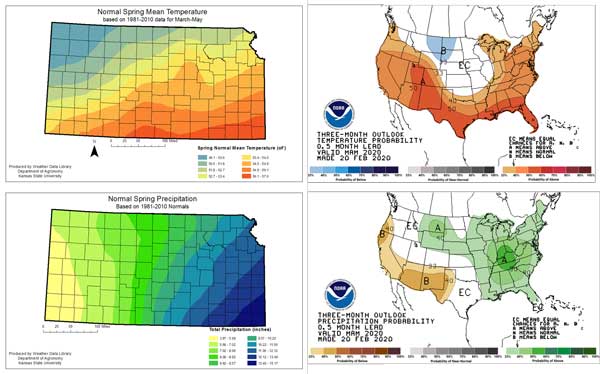 Figure 2.  Spring outlooks for temperature and precipitation versus the 30-year normal during March, April, and May for Kansas. Source: Kansas Weather Data Library and Climate Prediction Center

The science behind the outlooks

The ENSO (El Niño-Southern Oscillation) is neutral.  This means other factors, such as antecedent conditions, other patterns/oscillations around the globe, and placement/strength of the jet stream will be most dominant. Historically, spring is a period of strong steering winds and jet stream across the central U.S. resulting in conditions that are more active. Frontal passages become more common and are usually warmer/wetter. The pattern becomes more reliant on tropical conditions elsewhere and the location of any ridges of high pressure to our west.

Has the active period thus far in 2020 been a sign of things to come this spring? Possibly. The previous period observed very active sub-tropical jet stream contributions across the southern United States typical of ENSO neutral conditions. This was also driven by a combination of a highly anomalous Arctic Oscillation and a previously strong Indian Ocean Dipole. These conditions have seen recent trends downward toward more neutral conditions and are forecasted to continue. A neutral-to-negative Arctic Oscillation will allow colder air over the northeast U.S. and a storm track more eastward than previous seen. The March forecast from the Climate Prediction Center is very similar to this pattern. However, persistence of warmer-than-normal conditions have occurred over the last decade with summer tending to arrive earlier. Therefore, warmer-than-normal conditions are highly favored as we enter April/May – typically as warmer overnight temperatures.

Precipitation-wise, a storm track further east would usually place most of Kansas in a drier pattern. While this may be welcomed for many – it could also influence severe weather, as well as increased fire weather. Early spring often provides a southwesterly trajectory across the state into Kansas with strong storm systems. The growing drought, with the below-average snow pack, in the southwest would mean this flow provides drier/warmer-than-normal conditions. This could also fuel drought further in the western portions of the state. Further east/north, these storm systems would provide a different impact with heavy rain and thunderstorms. Basically, a double edged sword of systems fueling drought and flooding simultaneously. Hence, the introduction of a gradient of expected precipitation for the three-month period across the state.

During the spring season, severe weather frequently accompanies the frontal passages. In addition to the severe components of tornadoes, hail, and high winds, heavy rainfall is climatologically increasing.  The frequency of such events cannot be determined by current model outputs but will become more likely. As will conditions conducive for wildfires, since late February through mid-April are the climatological “fire season” in Kansas. This year, the concern for large wildfires is higher than 2019. This is a result of increased rainfall last year leading to a high grass yield and resulting fuel load. While these fires still require conducive weather conditions, increasing fire behavior and suppression issues have already been noted on recent smaller fires.