The Office of the Kansas State Climatologist has reported monthly climate summaries over decades. Beginning in 2019, a new monthly Ag-Climate Update for Kansans will be appearing in the Extension Agronomy eUpdate. Each installment will typically appear in the first or second week of each month. The Ag-Climate Update will provide basic climate information, climate impact, growing-degree-day (GDD) information for winter wheat or corn crops, climate outlook, and observed monthly extremes in Kansas. The first Ag-Climate Update is included in this issue of the eUpdate, “Variable Temperatures Rock January”.

To help our audience understand all the information presented, the following information serves as a brief description for observational data selections and computation methods used in the Ag-Climate Update.

We selected daily and monthly temperature and precipitation observations from the Applied Climate Information System, which is a seamless, integrated, and quality-controlled data system initially sponsored by USDA Natural Resource Conservation Service, the World Agricultural Outlook Board, and Regional Climate Centers in 1998. For the soil moisture data, we used NASA satellite of the Gravity Recovery and Climate Experiment. We also selected observations from the Kansas Mesonet for reporting monthly extremes observed in Kansas.

What is a climate anomaly?

Figure 1. Departures from normal temperature (oF) and precipitation (inches) for January of 2019

What are Growing Degree Days?

The heat unit (or thermal time) concept, commonly called growing degree days (GDD), has been used for over two centuries. This concept is to track plant-temperature relationships and phenological response through the accumulation of daily temperatures during the growing season (McMaster and Smika 1988; McMaster and Wilhelm 1997). More than a dozen of GDD calculation variants have been developed and tested for GDD calculations. The different methods account for changes in variety- and climate-dependent factors, and are thus more inclusive (Aiken 2005; Salazar-Gutierrez et al. 2013; Wang 1960).

Figure 2a displays the integrated information about the growing-degree-days (GDD) (for winter wheat or corn, depending upon the season). Accordingly, four zones for winter wheat planting dates are applied for calculating GDD (an embedded upper-right corner map in Fig. 2a). The colors coded from southeast to northwest Kansas are correspondingly applied to GDD and accumulated precipitation (PRE) calculations shown in Figure 2a. The planting dates assumed are September 20, October 2, October 7, and October 12 from southeast to northwest Kansas. The GDD and PRE are spatially averaged in each zone and temporally summed from planting dates until the last day in the month of the current Ag-Climate Update. Each GDD subfigure in Figure 2a includes a range of historical daily GDD by a shading area to represent from 5th to 95th percentiles, a median GDD line, a rank of GDD and a current GDD value shown in a color-coded box, all of which are calculated by using the daily base-period of 1981 to 2010. Similarly, each PRE subfigure includes the same information as the GDD but for accumulated precipitation. For example, a precipitation percentile of 100th would indicate that it was the highest accumulated precipitation on the last day in the month (wettest). 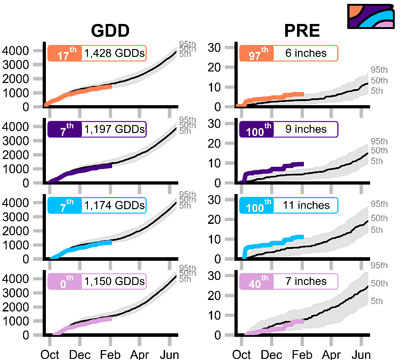 Figure 2a. Planting zone-averaged accumulated GDDs (GDD by oF) and precipitation (inches) for winter wheat from planting dates until January 31 and their corresponding percentiles.

Figure 2b shows the spatial distributions for GDD anomalies and root zone moisture across Kansas. The GDD is displayed as departures from normal GDDs for the month of the current (base-period: 1981-2010). Root zone soil moisture (Figure 2b, right panel) shows how much water is stored in the first one-meter of soil as a probability of occurrence in the period of record from 1948 to the present. For example, a 100th percentile indicates that the root zone soil moisture is the highest observed on record while a value near the 50th percentile indicates near-average conditions. The satellite observations from the Gravity Recovery and Climate Experiment were integrated with ground- and space-based meteorological observations within a land surface model to generate the continuous soil moisture that extends back to 1948 (Houborg et al. 2012; Zaitchik et al. 2008).

What are Extreme Degree Days?

We will calculate the extreme degree day (EDD) during the summer months (Lobell et al. 2013; Schauberger et al. 2017; Schlenker and Roberts 2009). The EDD is defined as the sum from planting to the current day of temperatures that are higher than optimal.

For winter wheat, the optimum temperature (Topt = 70oF) is consistent with GDD calculation. The EDD is a metric for estimating impacts that may occur under crop heat stress conditions (outside of optimum temperatures) for crop development and growth as well crop yields.

Taking from the NOAA Climate Prediction Center, Figure 3 includes two forecast maps of the probability of precipitation and temperature departing from the 30-year average from 1981 to 2010. Both maps indicate a probability that the observed average temperature or total precipitation over the upcoming 30 days will be in the range of one of three possible categories: below (B), normal (N), or above (A) as indicated by three color bars in each of the maps. In other words, these three categories can be defined by separating the 30 years of the climatology period (1981 to 2010) into the coldest or driest 10 years, the middle 10 years, and warmest or wettest 10 years. In a climatology sense, the 33.3% (one in three) probability is also called the climatological probability. The summation of three categories at any point on the map is 100%.  The color shading area indicates the degree of confidence the forecaster has in the category indicated (color bars). The darker the colors, the greater is the level of confidence. In addition, the numbers shown in labels for contours provide the probability that indicated category (A, B, or N) will occur (Sutherland, et al. 2018).

Figure 3. One-month outlook of temperature and precipitation departures in a sense of forecasting probabilities.

Schauberger, B., and Coauthors, 2017: Consistent negative response of US crops to high temperatures in observations and crop models. Nature communications, 8, 13931.