The wet pattern that dominated the fall of 2018 continued through much of 2019. The state was entirely drought free at the start of the year, and did not see even abnormally dry conditions before the end of July. Many lakes and rivers were near to above flood level into October. May 2019 ranked as the wettest month of record for statewide average since 1895. August ranked as the wettest August and tied July of 1993 for second wettest month of record. Statewide average precipitation for the growing season (Apr-Oct) was 29.83 inches, 129% of normal. The fall (Sep-Dec) pattern was drier, with an average of 5.89 inches, 80% of normal. The Southwest was especially dry, and saw expansion in drought conditions before the very wet end to December allowed for some improvement. The greatest annual total for 2019 at a National Weather Service (NSW) Cooperative station was 72.24 inches at Girard, Crawford County. The greatest annual total for a CoCoRaHS station 75.26 inches at Farlington 0.8 NNE, Crawford County. The driest reporting station was Johnson, in Stanton County, with 13.92 inches. The greatest 24-hour precipitation total reported at a CoCoRaHS station was 11.00 inches at Baldwin City 7.5 WSW, Douglas County, on August 1. The greatest 24-hour precipitation total reported at a NWS station was 9.42 inches at Horton, Brown County, on May 25. 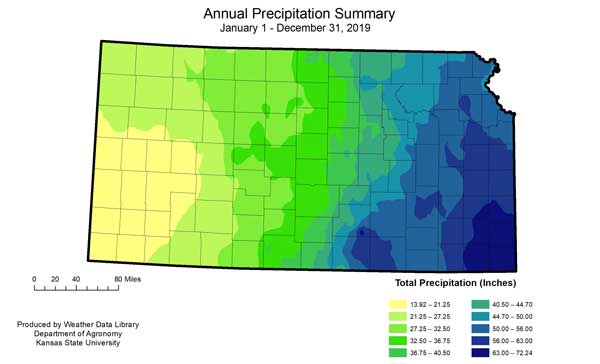 Snow was a prominent feature in 2019, with several significant events. There were two major snow events in January and February saw weekly snowstorms. Light snowfall in northwest KS in April ended the spring snow season for 2019. Snowfall returned to the state in October. During the month, 269 stations reported snowfall with totals ranging from trace amounts in eastern Kansas to 8 inches at Tribune 13NNE in Greeley County. November was highlighted with winter storm conditions across most of the central and northern areas of the state at the end of the month, creating difficulty for holiday travelers. December’s largest snow event occurred during the middle of the month, with the end-of-the-year precipitation largely in the form of rain. The greatest snowfall total for the year at a CoCoRaHS station was 50.2 inches at Hunter 2.1 NNW, Mitchell County. The greatest snowfall total at a NWS COOP station was 41.1 inches at Tribune 13NNE, Greeley County. The state average annual snowfall for 2019 was 17.6 inches, well above the last three years’ averages: 11.5 inches in 2018; 4.2 inches in 2017; 6.6 inches in 2016. 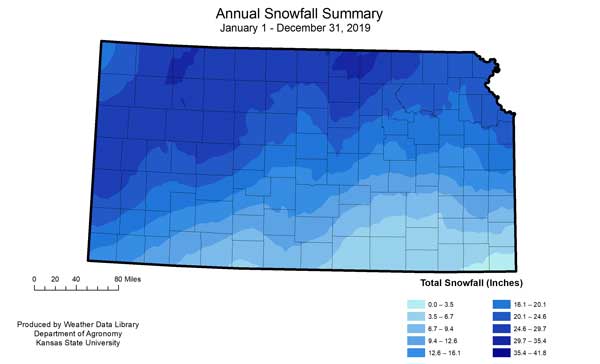 Temperatures averaged almost exactly normal, although there were wide swings between above-average and below-average temperatures. Statewide average temperature in 2019 was 53.7 oF, -0.8 degrees cooler than normal. This ranks as the 75th warmest, slightly on the cool side of the middle third of the 125-year distribution. Unlike last year, no individual month set a record for either warmest or coldest. Extremes ranged from the coldest reading of -15 oF at Oakley 4W, Logan County, on March 4 to the highest temperature of 108 oF at Hill City Airport, Graham County, July 17. The earliest start to the growing season was a last freeze on April 1 at various locations in the Southeast Division. The latest freezing temperature was reported at Syracuse, Hamilton County, on May 23. The first fall freeze was mostly seasonal state-wide. The average date was October 12. The earliest first frost was reported on October 6 at Wallace, Wallace County. The latest first frost was reported at multiple locations in the Southeast Division on October 31.

Drought conditions have shifted over the year. The year started with drought-free conditions statewide. Southwest Kansas saw the emergence of abnormally dry conditions by the end of July. The wetter-than-normal pattern of August largely missed that region where they saw just 81% of normal. The October-November period was drier than normal across the state, but was particularly severe in the Southwest and South Central Divisions. By the end of November, abnormally dry conditions had progressed to the Northwest Division, while moderate to severe drought covered parts of the West Central, Central, South Central and Southwest Divisions. Extreme drought was confined to the southwest. Ample moisture in December removed the extreme drought and allowed for improvement in other areas. The cool temperatures and lingering wet conditions in the fall created problems with harvest, while dry conditions in the west created problems with planting and establishment of fall seed crops, such as winter wheat and canola. Despite the dry fall, many streams and reservoirs are high, increasing the possibility of flooding in the spring. 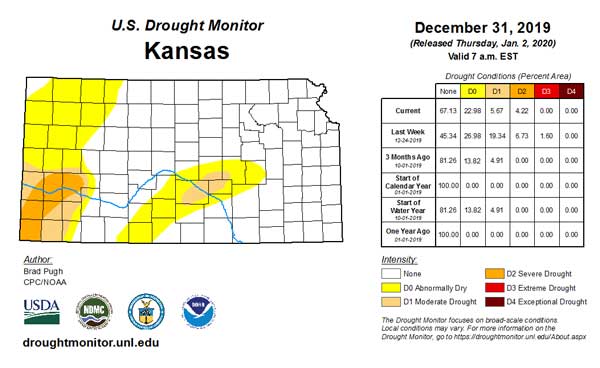 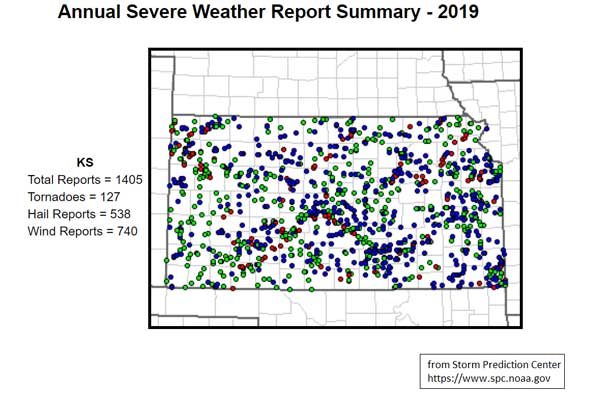 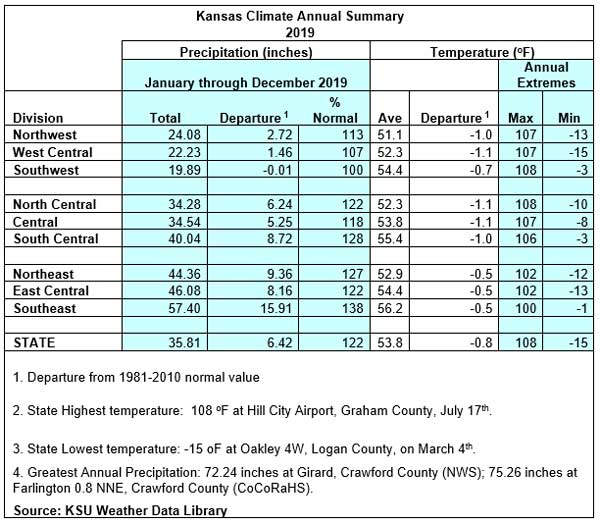 A companion article in this eUpdate issue from the Kansas Weather and Climate team summarizes the key weather impacts for each month of 2019.