The statewide average temperature in June was 74°, or 1.6oF above normal (Fig. 1). Western Kansas had the highest magnitudes above normal, which made drought conditions worse in this area.  From a climate perspective, the three-month average temperature (April to June) was slightly warmer (1.4oF above the normal), ranking as 36th warmest of the past 128 years. A short-term heat-wave event was observed in southwestern Kansas, where cattle deaths were reported between June 11 and June 13. The weather conditions likely led to cattle respiration rates that were above the danger threshold (110 breaths per minute) during middays in this period.

Precipitation was relatively evenly distributed across the state, but averaged around 0.5” below normal which made drought conditions worse, particularly in the western part of the state. 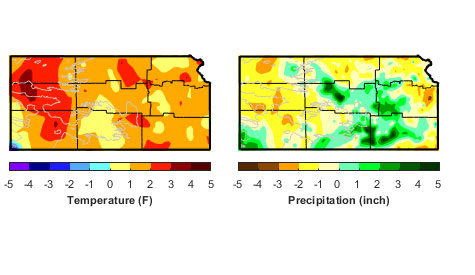 View the entire June 2022 Ag-Climate Update, including the accompanying maps and graphics (not shown in this short summary), at http://climate.k-state.edu/ag/updates/