Why do we need to inoculate soybeans?

Soybeans are big users of nitrogen. For example, a soybean yield of 60 bushels per acre requires 300 lbs N per acre in the plants, removing about 3-4 lbs of N per bushel of seed (Fig. 1). Most of the N required by a soybean plant is supplied via biological nitrogen fixation that takes place in nodules on the soybean roots. The nodules, when well established, can provide from 40-80 percent of the soybean plant’s N needs for the year. The actual contribution of biological N fixation to the N requirement of soybeans can be influenced dramatically by the amount of residual or mineralized N available in the soil profile or by stress conditions affecting the plant such as drought and heat, inhibiting N fixation due to the cost of maintaining the N fixation process. 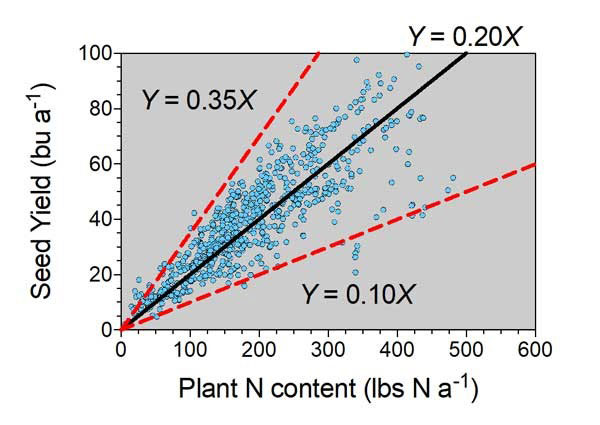 Yield responses to inoculation have been quite variable in Kansas and other surrounding states. However, the cost of buying pre-inoculated seed, or inoculating the seed or soil yourself, is low and the potential yield loss from poor inoculation can be significant unless available soil N levels are high.
Soybeans that are poorly nodulated will have to take up most of the N they need from the soil, just like corn, sorghum, wheat, or any non-legume crop. Because N fertilizer is generally not applied for soybeans, a crop that is poorly nodulated will quickly use up the available N in the soil and become chlorotic (yellow) from N deficiency. For poorly nodulated soybeans, N deficiency is usually evident later in the growing season as the nutrient demand increases (Figures 2, 3). 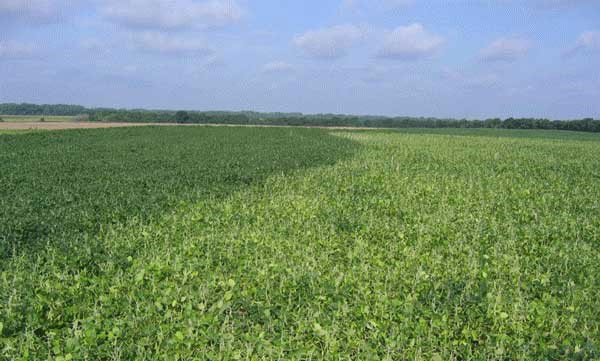 Figure 2. The soybeans in the part of the field at left in this photo had good nodulation. The area of the field on the right had poor nodulation and exhibited nitrogen deficiency symptoms. Photo by Tom Maxwell, K-State Research and Extension.

Why is the yield response to inoculation so variable?

There are several reasons for the variability in yield response to inoculation. For one thing, if soybeans have been grown on the field in previous years, there may be enough Bradyrhizobium bacteria in the soil to nodulate the soybeans adequately, in which case an inoculant may not benefit the crop. But if there is not enough Bradyrhizobium in the soil, the inoculant may increase yields by 2 bushels per acre or more on fields that have had soybeans in the recent past. On fields where soybeans have never been grown, the inoculant can often increase yields by 10 bushels per acre or more (Table 1).

Table 1. Effect of soybean inoculant on land with no prior history of soybeans

Even on fields with no history of soybean production, inoculation may increase nodulation but still have no effect on yields – especially if the yield environment is low and soils have enough available N to supply the crop’s needs.

Yield response to inoculants can also depend on soil pH, environmental conditions, and other factors. For instance, if lack of precipitation limits yields to less than 30 bushels per acre, poor nodulation may not impact yield. However, if rainfall is favorable, and yield potential is high, poor nodulation could result in a substantial N deficit and reduced yield.

Based on previous information, inoculation is most likely to increase soybean yield when:

Producers should be aware that inorganic soil N will reduce nodulation and N fixation by Bradyrhizobium japonicum bacteria. Where soil N levels are 40-60 lbs per acre or more, soybean plants may look fine, yet have reduced nodulation. At very high N levels, such as where the field was fertilized for corn but the producer decided to plant soybeans instead, there may be little or no nodulation. Depending on soybean yield and amount of residual N, this may be enough to carry the soybean crop for much of the seasons, but it may end up being N deficient during seed fill. In most cases, up to 20 lbs N per acre can be applied as a starter fertilizer to help get the soybeans started without having any detrimental effect on nodulation during the growing season (unless the upper layer of soil is already rich in inorganic N at planting time).

Soybean inoculation is basically “cheap insurance” against a potential N deficiency problem. Even if soybeans have been planted in the field recently, it doesn’t cost much to inoculate the seed.