This time of year, soybeans may begin showing signs of chlorosis or other leaf discoloration in all or parts of the field. There may be many causes of discoloration. Nutrient deficiencies are one possibility.

The relative mobility of the nutrient within the plant will determine if the deficiency symptom will first be noticeable on the lower leaves or upper leaves.

Mobile Nutrients: These nutrients can be transferred from older tissues to the youngest tissues within the plant. Deficiency symptoms are first noticeable on the lower, oldest leaves.

Immobile Nutrients: These nutrients are not easily transferred within the plant. Therefore, symptoms occur first on the upper, youngest leaves.

The following is a brief description of the symptoms of some of the most common nutrient deficiencies in soybeans.

Nitrogen. Chlorotic or pale green plants starting with the lower leaf (Figure 1a). Within the plant, any available nitrogen (N) from the soil or from nitrogen fixation within nodules on the roots goes to the new growth first. Soybeans prefer to take up N from the soil solution as much as possible, since this requires less energy than the nitrogen fixation process. However, both sources of N are important for soybeans since they are a big user of N. Nitrogen deficiency can be associated with poor nodulation (Figure 1b). 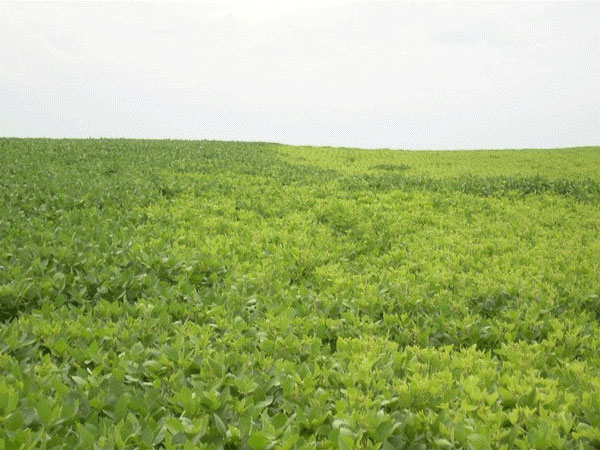 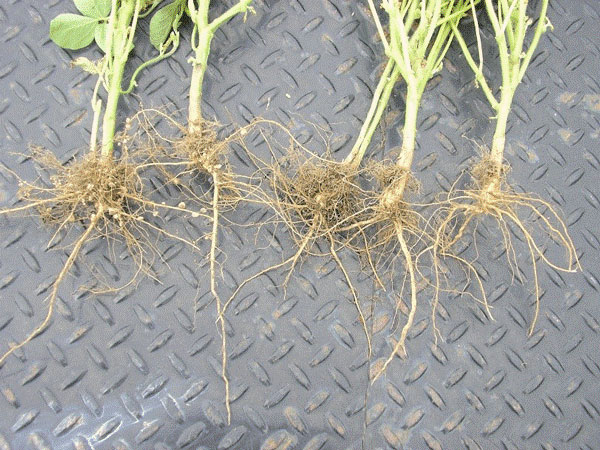 Iron. Iron chlorosis, occurs in calcareous soils (contains calcium carbonates) with high soil pH. The classic symptom is chlorosis (yellowing) between the veins of young leaves since iron is not mobile within the plant (Figures 2 and 3). A side effect of iron deficiency can be N deficiency, since iron is necessary for nodule formation and function. If iron is deficient, N fixation rates may be reduced. Iron deficiency occurs on calcareous soils, in addition to high pH, plant stress can favor the development of iron chlorosis, and therefore the severity can vary significantly from year to year in the same field. 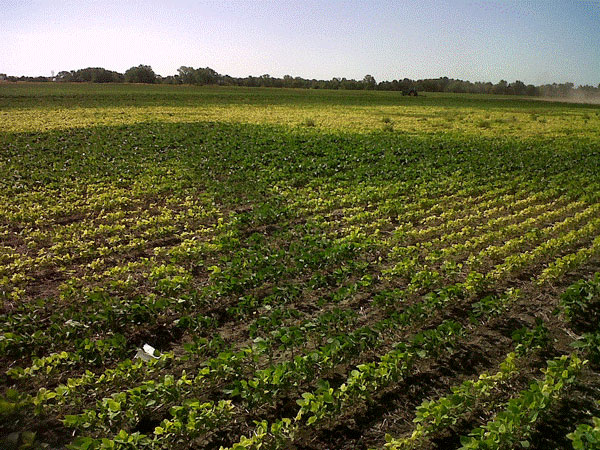 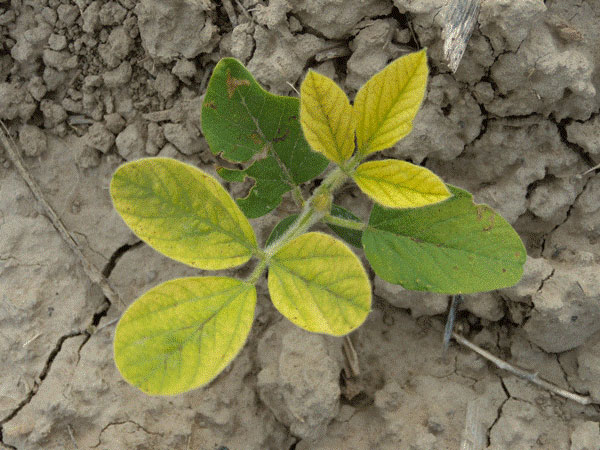 Magnesium. Lower leaves will be pale green, with yellow mottling between the veins. At later stages, leaves may appear to be speckled bronze. This deficiency may occur on very sandy soils.

Manganese. Stunted plants with interveinal chlorosis (Figure 4). Can be a problem in soils with high pH (>7.0), or on soils that are sandy or with a high organic matter content (>6.0% OM). Manganese activates enzymes which are important in photosynthesis, as well as nitrogen metabolism and synthesis. Symptoms are hard to distinguish from iron chlorosis. 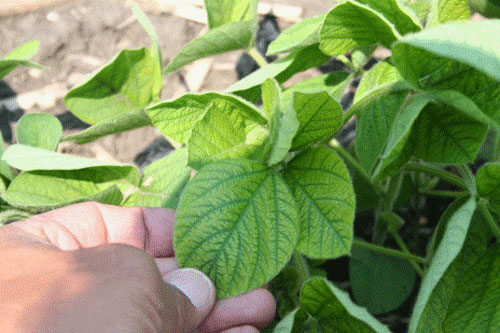 Potassium. Soybean typically requires large amounts of potassium. Like phosphorus deficiency, potassium deficiency occurs first on older leaves. Symptoms are chlorosis at the leaf margins and between the veins (Figure 5). In severe cases, all but the very youngest leaves may show symptoms. 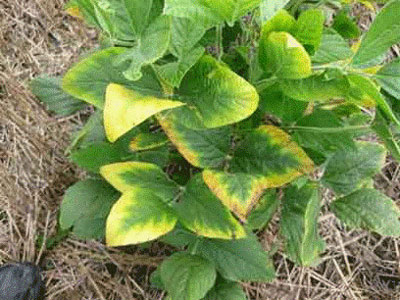 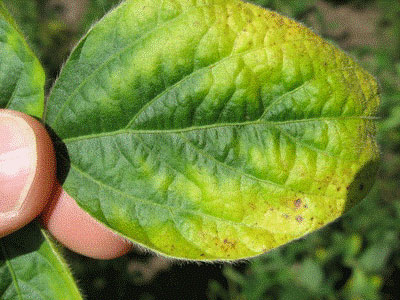 Sulfur. Stunted plants, pale green color, similar to nitrogen deficiency except chlorosis may be more apparent on upper leaves. Plant-available sulfur is released from organic matter. Deficiency is most likely during cool wet conditions or on sandy soils with low organic matter content.