The last crop yield forecast was released on October 10 by the USDA-NASS reporting a corn yield at the state level (+6 bu/acre, averaging 136 bu/acre) relative to the yield documented in 2018 (129 bu/acre), including the final statewide crop acreage (+1,000,000 acres, averaging 6.0 million acres total). For the full report published by USDA-NASS see: https://www.nass.usda.gov/Publications/Todays_Reports/reports/crop1019.pdf

In a previous Agronomy eUpdate issue from 2018 (Issue 712, September 28), a new yield forecast tool was discussed for corn in the state of Kansas (project sponsored by Kansas Corn). This tool is primarily based on real-time satellite data, historical yield data at county-level, and prediction of current geo-location of cornfields across the state. To obtain more information about the K-State “Yield Forecasting Tool” (YFT), visit the eUpdate article related to this topic (Issue 653, September 29, 2017). The primary steps for this tool, presented in a simplified approach, are highlighted in Figure 1. 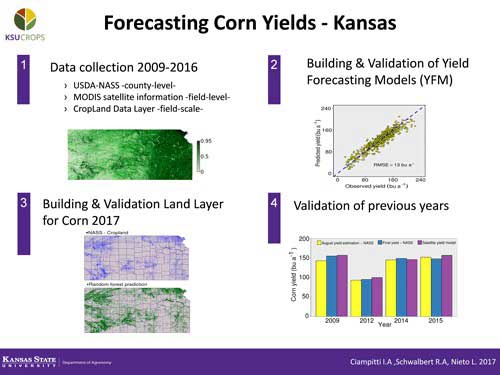 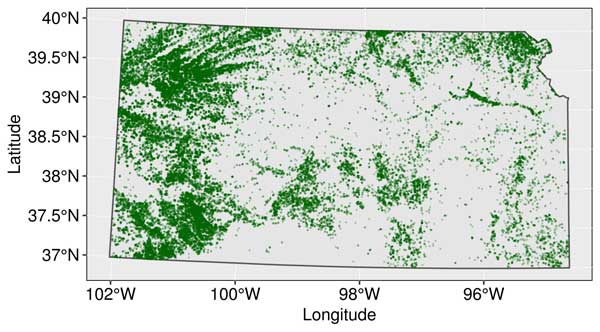 Figure 2. Geolocation for cornfields predicted by the Random Forest classification model for 2019. Graphic by KSU Crops, K-State Research and Extension.

An updated corn yield forecast was obtained for the state of Kansas via utilization of satellite imagery from planting until beginning of October for this current growing season. Based on the satellite yield model developed by our team, the state-level yield prediction is 137 bu per acre (Figure 3), one bushel higher than the yield prediction released by USDA-NASS (136 bu/acre). 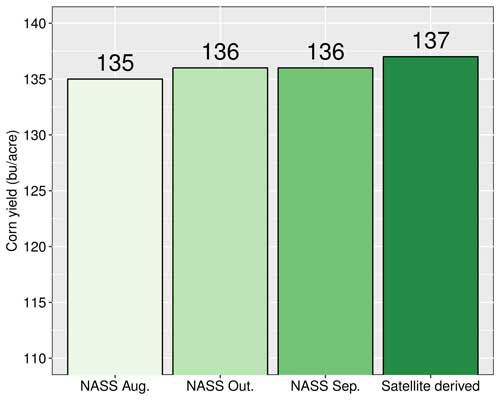 A new step on the Yield Forecast Tool: County-yield prediction

Our team worked on developing a yield forecast at the county-level. Final validation of the county-yield data will be done once the county-yield information is released by USDA-NASS. Based on the yield forecast model, even when the model presents a degree of error close to 18 bu/acre, it is expected that yield trends should follow the expected projections. Overall, higher yields are projected for the eastern part of the state relative to the 2018 growing season. For 2019 season, corn yields improve as you move toward the western part of the state (Figure 4). 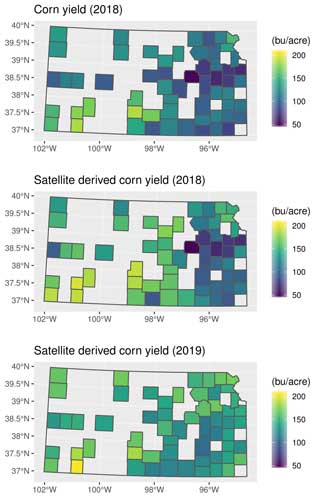 The Yield Forecasting Tool (YFT) predicted an average state-yield value of 137 bu/acre and lower yields for corn in eastern Kansas and higher yields for the western regions. At the state-level, the YFT was precise in predicting corn yields as related to the last forecast released on October 10, 2019 by USDA-NASS.