Anyone who grows corn is familiar with the variety of pests that attack the crop.  One group of pests includes various “worms” that feed on developing corn ears (Figure 1).  Corn earworm, fall armyworm, and western bean cutworm all can impact yield by consuming individual kernels. The damaged ears are then exposed to secondary fungal pathogens that can amplify losses.  For quite some time, these ear-feeding pests have been well controlled through the use of Bt corn varieties. Unfortunately, in some corn growing regions of the country, these pests have become resistant to a majority of the commercially available Bt traits that have been used to control them.  This has resulted in reduced efficacy of these traits and, in some cases, complete control failures.  Reasons for the appearance of resistance in these pests have been identified and include: 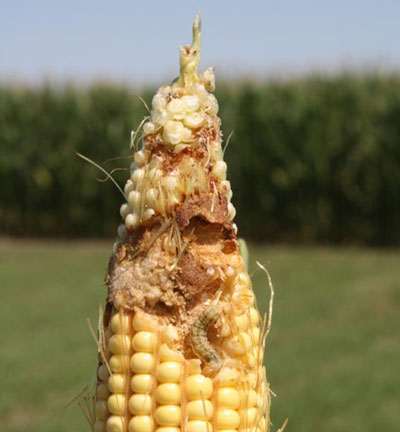 In light of these challenges and the continued spread of resistance in the country, the US Environmental Protection Agency (EPA) has proposed some new rules regarding the use of Bt targeting these caterpillar pests. Some of the proposed changes, introduced in November 2021, are included below.

These proposed changes are the product of several years of feedback from growers, industry, and university scientists from multiple states.  The proposal is currently in negotiation with the seed industry and nothing has yet to be implemented.