Soybeans acreage projections in Kansas are up 3% this season over the previous year (USDA prospective planting report). As seed cost is a critical economic factor, selecting the proper seeding rate is a key management practice. This article provides a summary of the main factors in determining soybean seeding rates.

There are three important terms: (1) “Seeding rate” refers to the target number of planted seeds per acre. (2) “Plant population” or “plant density” refer to the effective number of plants growing in a field. (3) “Seed survival rate” refers to the percent seed germination and emergence Normally, we may expect that about 80% percent of the seeds planted will survive to become part of the final plant density. It’s best to start by knowing the final plant density you want, then using the expected survival rate to calculate back to the number of seeds per acre you’ll need to plant. Below is an example:

Example of seeding rate calculation with a plant density target of 100,000 plants/acre, and expected survival rate of 80% (0.8 plants/seed):

Note: The seed survival rate varies depending on specific environmental conditions and quality of the planting practice. Thus, before deciding the seeding rates, it is necessary to consider potential soil and weather conditions that could affect the success of the final stand establishment, to achieve the proper plant density required.

From a planting date standpoint, seeding rate will need to increase at later planting dates to compensate for the reduction in the length of the growing season and reduced potential for branches to contribute to yield.

Identifying yield potential for each environment in your field is a good practice to use when refining the soybean seeding rate decision. A recent study by Carciochi, Ciampitti and collaborators published in Agronomy Journal evaluated soybean yield performance in a database of hundreds of experiments across the Midwest. Seeding rates ranged from 69,000 to 271,000 seeds/a, and final plant density and seed yield data were considered for the analysis. The data was classified by yield environments as follows: Low (<60 bu/a), Medium (60-64 bu/a), and High (>64 bu/a).

The main outcomes from this study were:

For site-specific management, the previous information can be used to generate prescriptions for variable rate seeding. Within a field, seeding rates can be adjusted for different zones within the field. This can improve profitability in various ways. For example, lower seeding rates could be used in certain zones, thus improving profitability by reducing seed costs and/or reducing the risk of unnecessary risk of lodging and disease development. Maintaining a fixed seeding rate for the whole field can reduce profitability compared to using a variable seeding rate. Figure 2 shows a simulation of potential lost profit ($/a) for not adjusting seeding rate by yield environment. The simulation comprises different scenarios with yield environments ranging from 40 to 70 bu/a, three survival rates (0.7, 0.8, and 0.9), two soybean grain market prices of ($12 and $16/bu), and three potential costs per bag of 140,000 seeds ($40, $55, $70/bag). 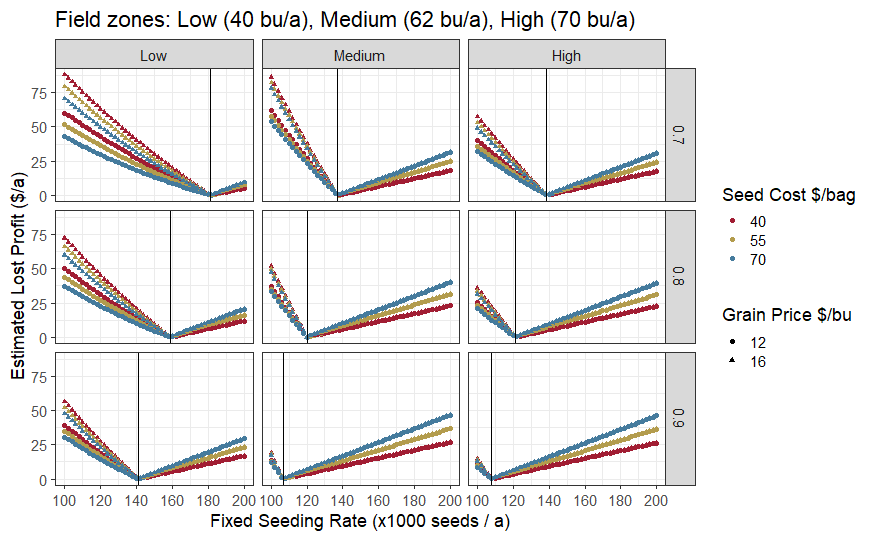 Figure 2. Simulation of lost profit per acre for NOT adjusting seeding rates by yield environment (Low, Medium, High) at three plant survival rates (0.7, 0.8, 0.9) and six combinations of seed cost ($40, 55, 70/bag) and grain price ($12, 16/bu). Hypothetical yield environments range from 40 to 70 bu/a. Hypothetical seed costs are based on 140,000 seeds per bag. The vertical lines indicate the optimal seeding rate for each situation.