It is that time of year again for post-emergent applications of Engenia, Fexapan, and Xtendimax on dicamba-resistant soybeans. In light of the recent court ruling, it is vital that application restrictions are followed closely to prevent non-target dicamba injury to conventional, Enlist, and Liberty Link soybeans. A brief overview of the application restrictions is provided below and can also be found in a previous eUpdate article here.

Application hours: Between 1 hour after sunrise and 2 hours before sunset

Do not apply in a temperature inversion. Check mesonet.k-state.edu/agriculture/inversion/ for conditions around the state.

Exposure of non-dicamba-resistant soybeans to even very low rates of dicamba can cause injury that includes leaf cupping, brittle leaves, stunting, pod curling, and plants becoming a darker shade of green (Figure 1). 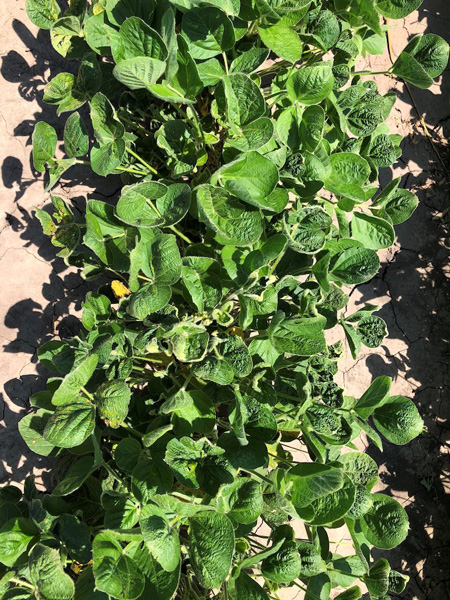 Figure 1. Leaf cupping and crinkling 2 weeks after soybean exposure to 1/100th of a field-use rate of dicamba at V3 growth stage. Photo by Tyler Meyeres, K-State Research and Extension.

Growth stage is a critical factor for severity of potential injury

Research conducted at Kansas State University and funded by the Kansas Soybean Commission has shown that the amount of soybean injury caused by off-target movement of dicamba depends on crop growth stage. Non-dicamba resistant soybeans develop fewer injury symptoms when exposed to dicamba during the early growth stages, like the third trifoliate (V3), than during flowering (R1/R2) and beginning pod (R3).  However, observing injury in non-dicamba-resistant soybeans does not mean there will be yield reductions. Yield reductions in our research did not correspond to visual injury. Generally, soybeans exposed to dicamba early in the season will recover by the end of the growing season. However, soybeans exposed later in the season will most likely have injury that will persist to the end of the growing and translate into some degree of yield loss. Exposure during V3 resulted in 6% or less yield loss, while exposure to 1/100th of a field-use rate during flowering resulted in 25% yield loss, and multiple exposures caused up to 50% yield loss (Figure 2). 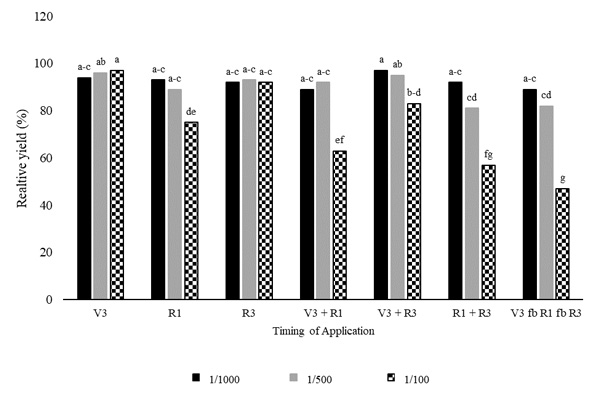 Figure 2. Soybean yield relative to the non-treated control following exposure to Engenia at 1/1000, 1/500, and 1/100 of a field-use rate when soybeans were at V3, R1, and R3 growth stages. Yield is average of Manhattan 2018, Manhattan 2019, and Ottawa 2019 experiments. Letters over bars indicate statistical differences. Bars with similar letters have statistically similar means.

It is critical that applicators follow application guidelines to not only protect producers of non-dicamba tolerant soybeans but also to help preserve dicamba-resistant technology.