A number of farmers are asking some pretty difficult questions on the value of drought-damaged corn for various uses, including as feed and for soil protection. There are a number of variables that go into that answer, some of which include:

Previous data collected in Kansas on drought-affected corn used measurements of the plant stand, height, dry matter, and moisture content to estimate biomass production and nutrient uptake/value of the biomass.

Forage yield. A general rule of thumb is that corn with <20-bushel yield potential is best used as forage, while corn with > 50 bushels per acre yield should be harvested for grain. What do these different yield levels look like? Figure 1 gives the dry matter content found in corn standing in the field (data collected in 2011) versus plant height (from the ground to the base on the tassel). 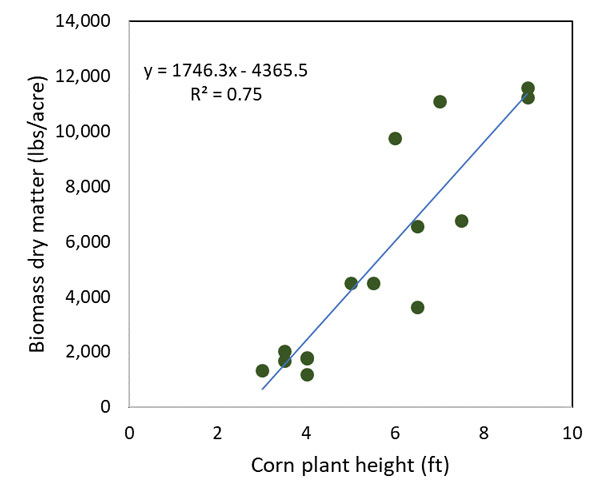 The majority of the nitrogen (N), phosphorus (P), and sulfur (S) in plant material are generally present as protein and other organic compounds. For these nutrients to become available to plants, these compounds must be broken down and the N and P mineralized. This process will normally take 3 or more years to complete, with the C:N ratio being the primary factor controlling the release rate. Corn stalks are normally a very high C:N material, with a C:N ratio of around 60 to 1. In high C:N materials, very little net N mineralization will occur until the organisms utilizing this material as a food stuff reduce the carbon content of the residue to a C:N ratio of roughly 25:1.  In these severely drought-damaged crops, the N content is much higher than normal, since there is little or no grain present. The C:N ratio in many of these severely damaged crops is less than 35:1. So net mineralization will occur much quicker, in a matter of months rather than years. In very severely damaged corn where N content is around 2% or more, roughly 50% of this N, P, and S is likely to be available for a summer crop planted next spring.

Corn silage with much more stalk and grain contains about 25 pounds K2O per dry ton. When the biomass is removed, the amount of K2O removed from the field is usually much higher than nitrogen. Potassium can leach from the residue and back to the soil in a few months and is K that will be likely available for the next crop.

Unfortunately, wheat planted this fall into these residues will not benefit nearly as much from the N, P, and S present in the vegetation as there will not be as much time for soil organisms to break the residues down and mineralize these nutrients. Winter wheat planted in October will essentially be done taking up nutrients by the end of May, when soil organisms will be getting into high gear! 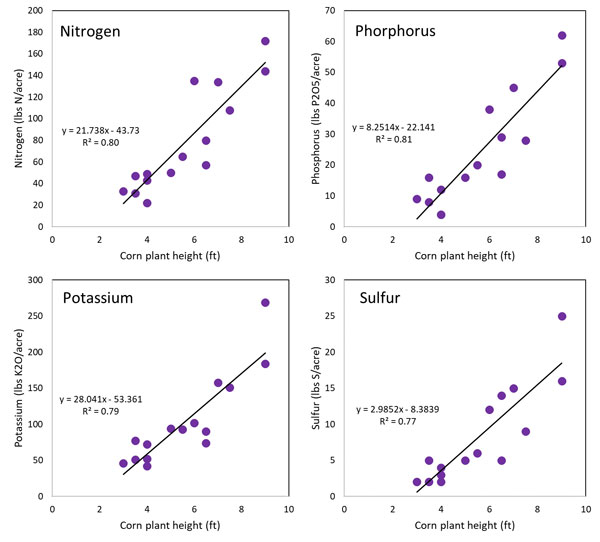 A number of factors should be considered when assigning a value to drought-damaged corn. Nutrient removal from the field is one key aspect since biomass can export significant amounts of nutrients. Some nutrients like K can are primarily present in the plant biomass, and in a typical grain production system, most of the K stays in the field/crop residue and is available for the subsequent crops. Other nutrients such as N, P, and S will become available after residue decomposition and mineralization, which will require time and may be only partially available in the short term.