With respect to climate, February was middle-of-the-road. It ranked as the 33rd wettest February due to the pushing precipitation south by polar vortexes. It ranked as the 66th warmest, right in the middle of the distribution. Atwood set a new record high temperature for the month, with 84 oF on the 3rd. Across the state, 48 new daily record high temperatures were recorded, all on either the February 2nd or 3rd. Despite that warm start, the month averaged slightly cooler than normal.

Statewide precipitation averaged slightly above normal, with a distinct gradient north to south. All three northern climate divisions were below normal, while all three southern climate divisions were much above normal. Severe weather was limited, and confined to winter weather conditions. There were no reports of tornadoes, hail, or damaging wind.

Winter wheat is beginning to emerge from dormancy, and monitoring the first hollow stem development is important in dual-purpose wheat production systems (Figure 1). 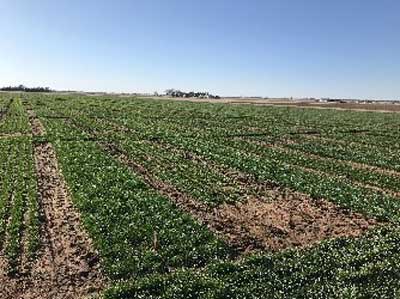 View the entire February Ag-Climate Summary, including the accompanying maps and graphics (not shown in this summary), at http://climate.k-state.edu/ag/updates/.